The October 2008 Carlisle Champion Wilodge Cerberus was purchased for 50000gns. He remains recognised as one of the finest Limousin bulls on record.

Wilodge Cerberus is popular with buyers all over the world and is used extensively at Whinfell Park. Cerberus’ exceptional shape and breeding is backed up by figures in the top one per cent of 200 and 400-day growth and he has two copies of the desirable F94L ‘profit’ gene.

Cerberus is father to numerous top heifers and bulls. Today his progeny continues to impress. Wilodge Cerberus is sire to a list of outstanding progeny such as:

Aultside Meanmachine bred by Gary Patterson sold for 65,000gns following being crowned Supreme Champion in the pre-sale show at H&H Carlisle in 2018. No stranger to a show success Meanmachine had placed Senior Limousin Champion and Overall Senior Continental Champion at the Stars of The Future Calf Show the previous year. Aultside Meanmachine is a full brother to Aultside Hulk who sold for 55,000gns to the Republic of Ireland, becoming the highest priced British Limousin bull to have been exported from the United Kingdom. Prior to the sale Aultside Hulk had won Intermediate Championship before going on to be placed as Reserve Overall Supreme Champion.

Rahoney Geoffrey sold at Carlisle in February 2013 for 23,000gns. This June 2011-born bull had earlier been placed as Intermediate Champion and Overall Reserve Supreme in the pre-sale show. In 2012, this bull had also placed Reserve in the Northern Ireland Limousin Championships.

Ampertaine Foreman is out of Ampertaine Bathsheba, a Sympa daughter and was reserve overall champion at Carlisle in February 2012 when he was sold for 38,000gns. 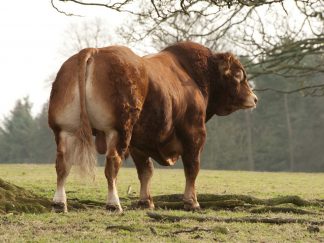