Foxhillfarm Jasper, Overall Champion at Carlisle in 2015 was purchased for 35,000gns. The son of the reputable Bankdale Alice then went on to dominate the 2015 show circuit. This included being crowned Supreme Champion at the Royal Highland Show, Male and Reserve Junior Champion at the Great Yorkshire Show and the same at the Royal Welsh Show.

Following Jasper’s 2015 successes we decided to show him again in 2018. He was crowned Male Champion at the Royal Highland and The Great Yorkshire Show, where he stood in a line-up of four, two of which were Jasper Sons.

Whinfellpark Marilyn, was also a part of the 2017 Whinfellpark show team going on to be crowned Reserve Female Champion and Reserve Overall Limousin Champion at the Northumberland County Show.

Jasper has been used to serve both heifers and cows in the Whinfellpark herd. His progeny is proving easy to calve. 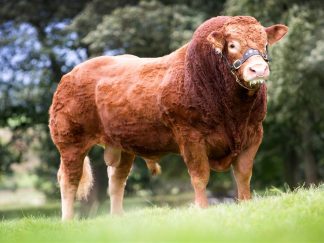