Lowerfryydd Empire was Overall Champion at Carlisle in October 2010. Where he was purchased for 30,000 gns.

Whinfellpark’s extensive range of breeding females is led by Lowerffrydd Empire. He has an excellent temperament and is easy calving, followed up by outstanding growth weights and muscle. He is Whinfellpark’s first choice to use on heifers.

His progeny is proven in many sale ring. With bulls such as Ballyrobin Joop selling at 20,000gns and Whinfellpark Iago, 13,000gns.

Empire progeny include the highly admired Whinfellpark Lomu, who has been retained as a Whinfellpark stock bull. 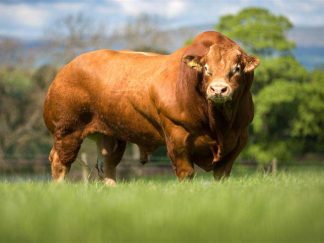